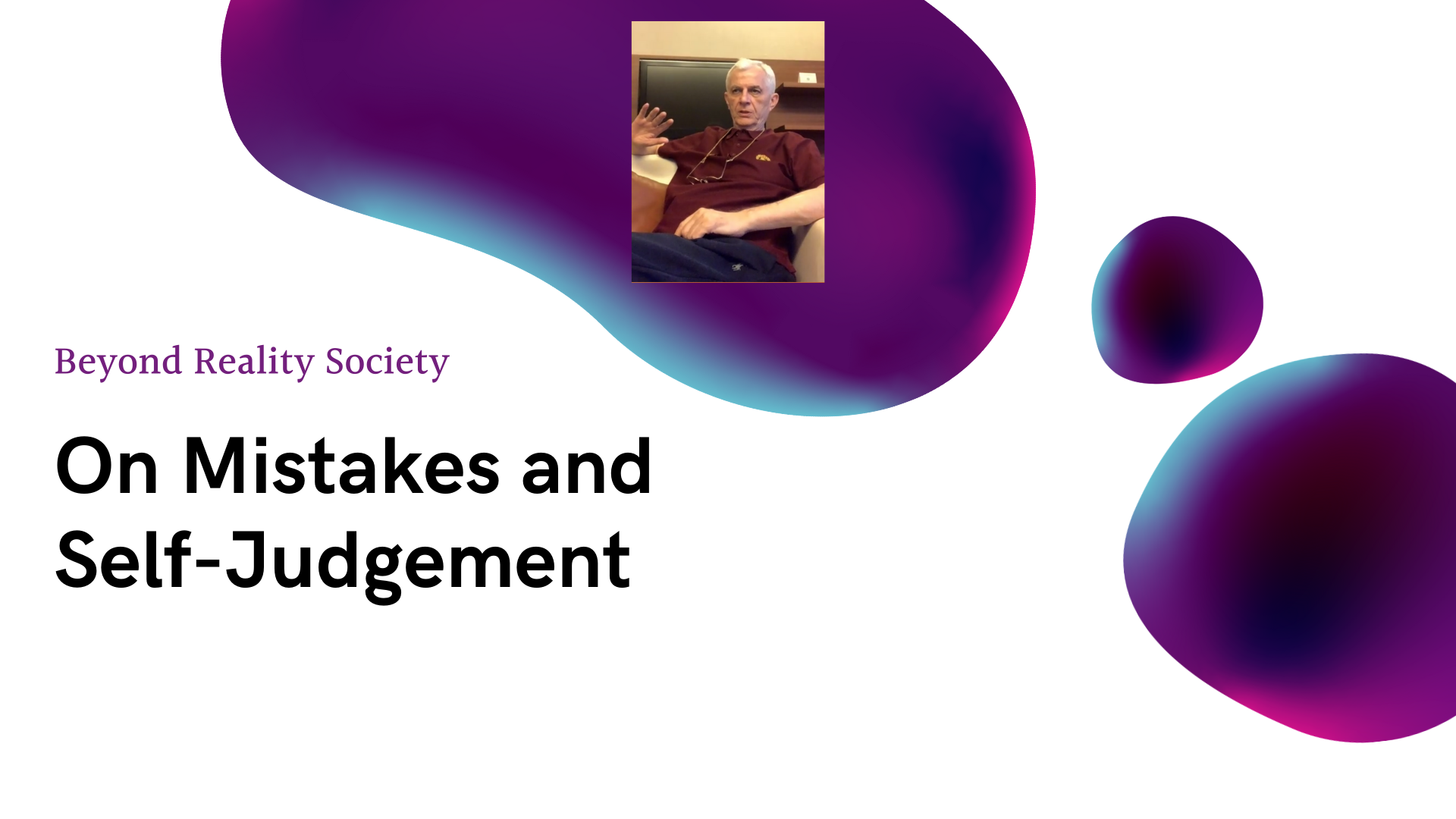 On Mistakes And Judgement

THE TRUTH ABOUT MISTAKES 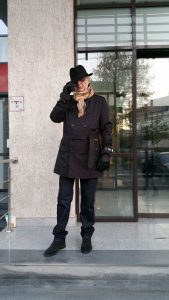 Leading Professor in the Science and Principles of the Universe
Pioneer Leader in providing the first complete AGE-REVERSING solution ever
Founder of "Beyond Reality Society" and SAVIO Age Regress Programs
Author of over 70 books (most of them published in a closed circuit) dedicated to life in the Universe, human brain development, evolution and involution of the human being on this planet, death as a curable disease and immortality, and many more.

A mistake can never be fixed, but it may not be repeated. Nevertheless, nor should the burden be present, because it prevents you from continuing.

Know that the punishment from the Creator is a myth. The Creator has His methods to correct, but no method includes punishment as a solution.

Everyone’s judgement, by his deeds.
***

In religion, they assume, since nothing is certain there, that the human being, after he dies, ends up in hell or makes it to the heaven, according to his deeds.

Here, religion is partially correct, to wit in good sooth by the deeds of everyone, the human being is accepted in the Universe or, otherwise, he is reincarnated and starts again and again until he can mend his ways and succeed in becoming a member of the Universe. The procedure was valid until 02 02 2002, thereupon the spirits were remade and the human beings on Terra live only on the energy of maintenance and sustenance, like the other species or nature.

The Judgement, in terms of form, existed and still exists until this cycle of transition comes to an end, forasmuch as Terra needs time for transition regarding the new adaptation to normal conditions of existence.

Mankind went the wrong way and, consequently, evolution has stalled and has been ignored.

Evolution was replaced with survival in various forms, increasingly more sinister, – and examples can be plentifully given in this regard -, but we know them, to wit we know the reality of society, – and it is trivial to emphasize it. Since the process of continuous degradation is present, the human being had no chance of/towards evolution and therefore chose his judgment as follows:

1. The human being dies, and this is the first step of self-judgement.

2. The Spirit receives the data from the soul and departs for the Creator. Throughout 3 days, the Creator confers, through the spirit, with the person concerned. The human being realizes the committed mistake and sees that there is no other way than to bear the consequences of his own mistakes.

3. In the preliminary stage of death, the muscle system disconnects from the brain, that is, the muscles begin to have different uncontrolled forms. The next moment, the bone system collapses, too; and the human being has only cumbersome, slow movements at rare intervals.

Thereafter, the auditory system and that of the senses are switched off; and the communication is almost non-existent or accidental. At the same time, the immune and blood system fail; and the body remains without defence and in agony. Next comes the cardiovascular system and the last one is the nervous system and therewith the picture is complete. The human being is declared dead; nevertheless, from now, the process of judgment, or rather self-judgment begins, because it is not the Creator Who achieves this procedure, but man through his deeds.
The Creator discusses with the spirit.

The Creative System - Not Mentioned Anywhere in Medicine

4. The human being enters a trance which only comes to an end after the last neuron which exists in the brain, out of the approximately 5 000 000 000 neurons, peters out.

The soul accompanies this procedure down to the last neuron. The human being enters what he is left with, namely the creative system, a system that is not mentioned anywhere in medicine, because it is unknown to them. You can think and create not through the nervous system, in so far as the nervous system is the one which coordinates your movements in terms of space and direction, of orientation; nevertheless, the one which creates, which gives you reason and gifts you with conscience, or which coordinates your feelings is none other than the creative system of Creation. That’s what the human being is left with. This system makes you know exactly what happens with you from the moment you are declared deceased. The human being knows everything that happens to him; however, since all his systems are disconnected, he cannot communicate or respond. The human being sees how he is chopped during the autopsy and all the procedures thereafter, including the funeral, wailing, mourning, the priest’s drawl, chants and all that follows.

Afterwards, the ground above comes in and everything starts from the beginning of the end, for now comes the hardest part of self-judgement. The soul is present, to wit the third eye, as well, and thereby the light, as much as needed. Forasmuch as the soul is present at cell level, the neurons, senses and smell return, as well as the respiratory system in 15%. The human being experiences the process of decomposition, just as that of his own body, so that of the coffin, of the material it is made of. Slowly, slowly, the ground breaks through the coffin, regardless of the material it is made of, since iron and all else succumb to weight, to wit time, weight and material ageing let the ground break through the coffin.

From that moment, the toughest phase of self-judgement commences. Worms being to make their appearance. The human being starts turning into their food and feels all the pain of this procedure. Of course, this is nothing until the worms reach the brain where they start eating the neurons. Gradually, the neurons and the constituent matter of the brain run out. The pain of this procedure is borne by the individual concerned down to the last neuron wherewith the soul self-composes, in its turn, yet with a shrill, excruciating cry; and only until then, the human being will have been alive.

This is the Judgment, for that matter; there is no hell, inferno, or other melodramatisms of this genre.

You might ask me why I haven’t made this fact known to the human being. Because there is no need, now you need give a warning through the book you are about to release, and there is something more. Now, as to the human being, even if he knows, forasmuch as there are no more spirits, there is nothing he can do to change anything.

The human being was warned, even by example, not to accept death. Had he been explained as above, fear would have been made its presence felt; however, fear is for weak people and the Universe does not need weak people; moreover, fear is an inadequate counsellor. In evolution, there is will and determination, desire; but fear is out of question.

The So-Called Ghosts or Phantoms

5. There is also another phenomenon that is often present and has not been explained: the presence of the so-called ghosts or phantoms.

There is no such thing, but it is about stray, wandering or errant spirits for multiple reasons. What are the reasons – it is not the case now to mention them, but it is good to know that there are such temporarily errant spirits. I say temporarily, because they are detected and absorbed into the Universe. What happens in this case: that spirit goes no further than the kin on Earth which he belongs in. The attempts begin, in this regard: the spirit, for instance, has 2 children and 3 grandchildren. He begins to throw out a feeler where he has more genetically distributed percentages and finds out, for example, one of his children. He will stay near the child’s spirit and try by force to take over his soul, with a view to changing the original spirit. That person suffocates and the risk of transfer between spirits is huge; however, the ones in the Universe step in and solve this situation. On Terra, countless cases happened; however, in terms of successes, there were only 41 unfortunate accidents, namely undiscovered on time. In this case, the spirit that entered, by force, another body, produces the following effect: that being takes over the features of the deceased and is changing rapidly; nevertheless, the total transfer shall not be completed, because there is a Universal System which shows a maximum degree of alarm and the problem is solved; however, the human being where another spirit entered by accident does not pass through self-judgement, but is immediately reincarnated, in compensation for the accident.

I have shown you that, throughout Terra’s history, there were only 41 accidents; hence, it is a normal procedure, after all.